You might be able to outrun a bear on a bike. However, this would depend on many factors such as how close the bear is to you when it starts to chase you, and how fast you are able to pedal.

Contents show
1 Do you play dead if you see a bear?
2 How do you carry bear spray on a bike?

It will also depend on how calm you are and how fast the bear may be able to move. 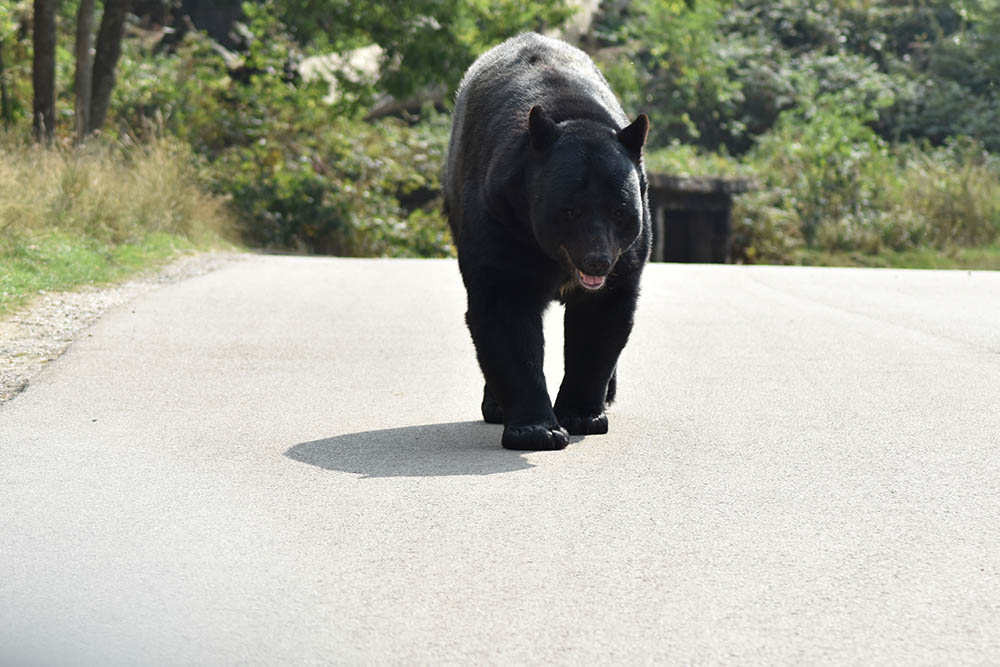 On average, the maximum speed that a bear can ‘run’ (bear in mind that this will be on all four paws) is around 35 miles per hour (MPH).

In comparison, the average speed a human can ride a bike varies depending on his/her experience.

At most, it may be around 28 miles per hour if you are an experienced rider. Beginners may be much slower, at 10 to 15 miles per hour.

Of course, these figures don’t seem too hopeful but keep in mind that the speed of a bear listed above is the very highest they can go.

In actual fact, they are likely to be slower than this and would take a little while to build up to that speed.

This may give you some time to get a head start on the bear. As such you should pedal with all your might if you are trying to escape a bear.

Also bear in mind that oftentimes, a bear may just give up, especially if you have managed to get a bit of a head start on them.

They will be looking for an easy target, and so you as a fast-moving target would not be particularly attractive to them.

That being said, do not let your guard down. If you are being chased by a bear, get away as quickly as possible, and do not be afraid to use bear spray if they get too close.

Your chances of getting attacked and killed by a bear are slim, but the risk is still there.

If, of course, the question is meant literally and it is the bear that happens to be on the bike and you are running away from it, then you should not worry.

You will easily outrun it as bears are now known for their balance and will likely struggle to ride a bike. The bike will also likely be too small for its gigantic frames, and so you will be well away before the bike has even managed to pedal.

Do you play dead if you see a bear?

No! Despite popular belief, we do not recommend that you play dead if you see a bear. Their aim is not simply to kill you and leave you.

If a bear is trying to attack you then it is likely that they are hungry, and see you as a decent meal.

As such, you ‘playing dead’ gives them ample opportunity to start chomping on your very much alive body.

That being said, it is thought that playing dead will work if the bear in question is a mother bear who is protecting her cubs.

Instead, you should try your best to run away from the bear before you are attacked.

If you happen to be biking or hiking in the wilderness where there is a risk of a bear attack, you should also be well equipped for dealing with a bear attack.

As such, you will likely have bear spray, emergency bells or whistles, and emergency contacts for mountain rescue.

If you really can’t get away from the bear and they attack you, do your best to fight back. By this, we don’t mean to say that you should embark on a fistfight with the bear.

What we mean is that you should use your bear spray to try to deter them and do not be afraid to try and injure the bear yourself with kicks, punches, rocks, and any sharp objects you may have.

Guns may help but if you do not kill the bear the first time then they can make matters worse and turn the situation even more lethal.

After that, you should sound an emergency bell or alarm to alert the necessary services. Try and take cover whilst you wait for the rescue services to come, and if you can manage it, try your best to run away from them.

Despite popular belief, sounding your bear bell or siren, or even a whistle does not deter the bear. Bears are not bothered by loud noises.

However, noises are a great way of letting bears know that you are there.

Rather than a bell or whistle, you can try talking loudly, or even singing to alert a bear of your presence. With any luck they will get scared and run away, taking away the threat of danger.

How do you carry bear spray on a bike?

If you are concerned about carrying bear spray whilst on a bike, you should not worry. There are a number of things you can do to ensure you are protected from bear attacks and you can safely pedal, all at the same time.

To ensure you have two hands empty and free to cycle, you can choose to carry your bear spray in a holder around your chest or on your back.

You must ensure that you can access the spray easily, especially since bear attacks are unpredictable and can happen fast.

You do not want to be fumbling in a bag for the spray as a bear charges at you. Act quickly and spray them before making a swift exit on your bike (or by foot if that is safer in this instance).

Remember, pepper spray or bear spray is not a deterrent, as such. With this in mind, it should not be sprayed on your tent, bike, or person.

Instead, in order for it to be effective, you should only use it in the event of a bear attack. You should spray the face, eyes, and nose of the bear to stun them and then make a quick exit to safety.