Riding over a drop-off is one of the most difficult and technically challenging feats a mountain biker can pull off.

To successfully navigate a feature like this riders need to execute a perfect series of technical maneuvers to take the obstacle as safely and efficiently as possible.

There are two main ways to take a drop-off, depending on the severity of the gradient and the size of the drop. 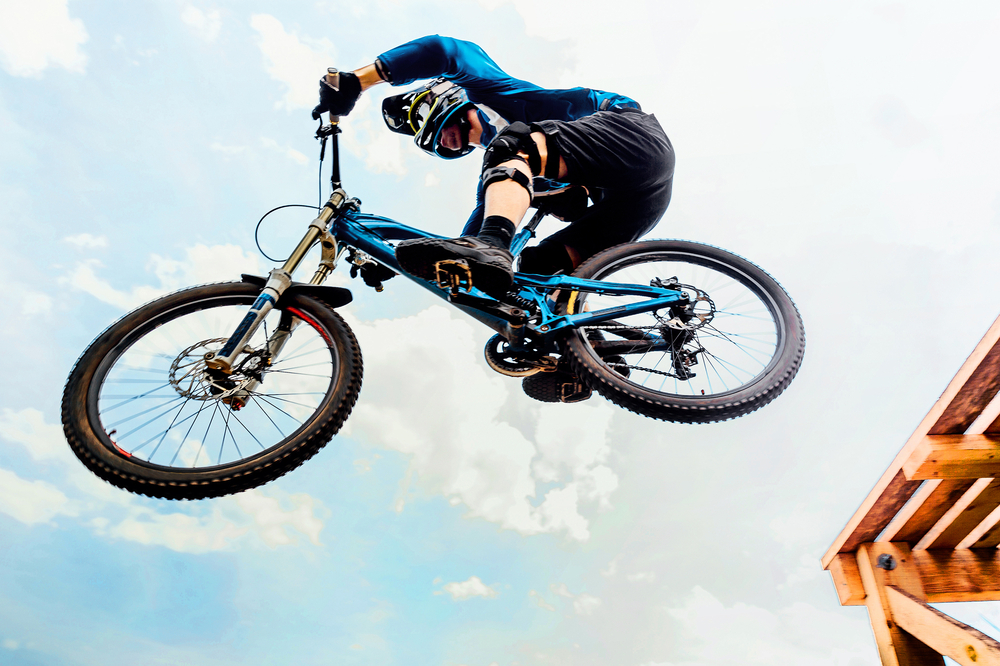 For smaller drop-offs and step-downs, it’s sometimes possible or even preferable to roll over them.

When rolling over a drop you should approach it slowly, at a brisk walking pace, or even slower if you’re unfamiliar with the trail and the drop in particular.

Once you’re approaching the drop, scan the drop itself. Check the condition of the edge, and try to get a look further down the trail to the landing area and what lies beyond.

It’s important to try and determine what line you’ll take when exiting the drop and moving further down the trail to prevent you from getting overwhelmed or making poor line choices.

As you approach the drop, keep your brakes covered and keep your eye on the edge, as you near the precipice.

As the front wheel rolls over the edge, you should let the bike roll away from you slightly, letting your arms extend and allowing yourself to slide off the back of your seat or hover behind it, allowing your seat to raise up between your legs.

Keep your weight over the back wheel, but don’t get too low otherwise, your rear wheel may catch you in your vulnerable parts which is an excellent way to hurt yourself and botch the whole move.

Once your front wheels are nearing the bottom of the drop and your rear wheels are over the edge you’ll feel the bike start to level off as the front wheels hit level ground.

This is the perfect time to bring your weight a little more central over the rear of your seat and bend your elbows to allow you to absorb feedback from your front wheel which will now be ready to tackle the exit line and continue down the trail.

An alternative way to tackle a drop-off is to jump it. This is typically best done on a bike with suspension, by an experienced rider who knows the trail pretty well and is confident.

Jumping drops is a much faster way of traversing this type of feature, and is sometimes essential on larger drops.

Trying to roll over a large drop will cause you to catch your front chainrings at best, which can cause them to get severely damaged, as well as flipping you over the handlebars due to the sheer nature of bigger drops.

To successfully jump drop-offs there are a few important steps to take.

The most important thing you need to do is fully commit to the jump. This is also the most difficult part.

Approaching a drop at speed is genuinely scary, especially standing on a bike which adds to the elevation and makes your perception of the drop that much higher and steeper.

You need to be carrying enough speed so that you don’t drop like a stone, but not too much so that you fly off the edge and lose control on the landing or miss the landing area.

This takes practice, and it’s hard to say how much speed you’ll need as it depends on the size of the drop. Just enough speed to clear the drop itself should be enough to get over it safely without compromising the landing.

As the front wheel leaves the edge of the drop it’s very important to lean back.

As you prepare to land, get ready to use your arms and legs to help absorb the impact. Keeping them slightly bent while in the air and ready to flex with the suspension will help you stay in control and get you ready to tackle the rest of the trail. 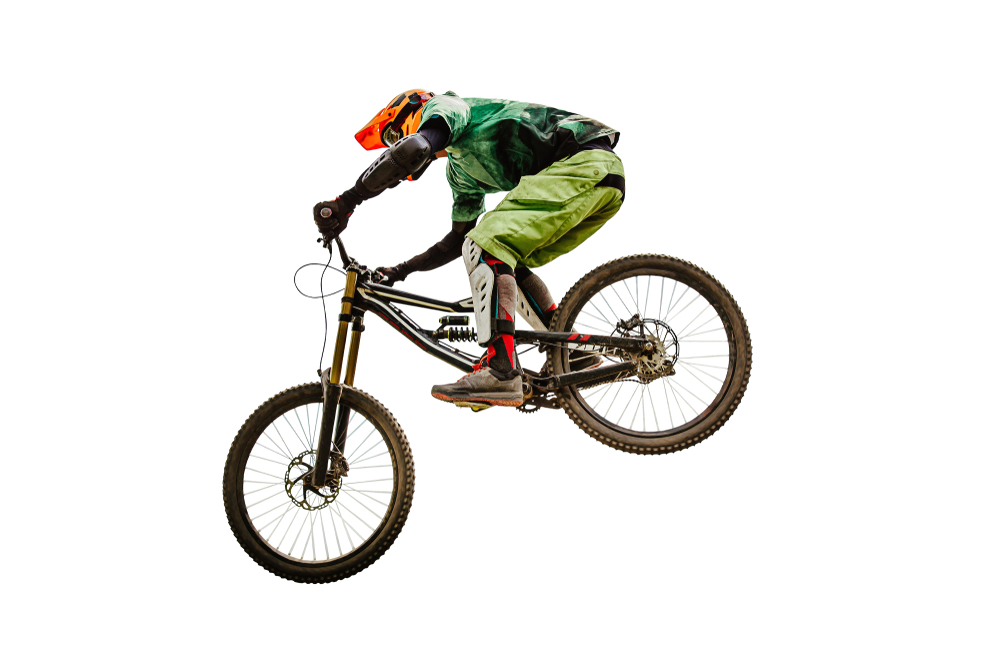 What is a drop in mountain biking?

Drop-offs are some of the most intimidating obstacles you can face while out at the trails.

Flying over a sharp edge and somehow sticking a landing after a sheer drop makes this one of the most technically difficult feats in the sport.

Doing this while hurtling down a hill surrounded by trees makes it easy to see why these are some of the most feared features on any track.

Many riders will simply try to go around them and avoid them, while others may stop altogether to dismount and climb down them.

Attempting a drop-off without proper technique, the right equipment, or full commitment can result in embarrassment if you’re lucky, or a nasty injury if you’re unlucky.

But what actually are they?

Well, in short, it’s a vertical drop in the track, a ledge that mountain bikers ride off of, to land on the lower part of the track that will continue on below.

Drops like this come in various sizes, with some being very small step downs that are relatively easy to roll over, and which won’t pose too much of a challenge for relatively inexperienced riders.

However, some drop-offs are truly massive, with sheer drops of anywhere up to 4 to 6 feet, particularly on downhill focused trails that require a lot of guts and even more suspension.

You’ll be able to recognize them as you approach because the trail will look as if it almost stops, and there will typically be a pretty clear and open landing area beyond it to allow riders plenty of space to stick their landing.

If you’re unsure or have never ridden over a drop-off before, it’s not a great idea to fully send it straight over a drop, because it could be way bigger than it appears and if you’re unfamiliar with it or the trail beyond things could go badly wrong.

How do you approach a drop on a mountain bike?

As mentioned above, it depends on the size of the drop. If you’re familiar with the trail and a confident rider, you can approach with speed and use this to carry you over the drop, which is as fun and fast as it is difficult and gnarly.

If you’re an inexperienced rider or are unfamiliar with a trail, approach slowly to be able to take in your options first and give yourself a chance to back out if you need to. Slowing down also lets you roll down the drop if it’s shallow enough.

How do you ride a hardtail over a drop?

Much the same as any other bike, but flexing your arms and legs more will help make up for the lack of rear suspension that would normally dampen the impact of a drop-off landing.

Typically hardtails won’t be able to take a drop-off as quickly as a full-suspension bike and require a very precise landing due to the lack of rear suspension to help bail you out and keep things under control.